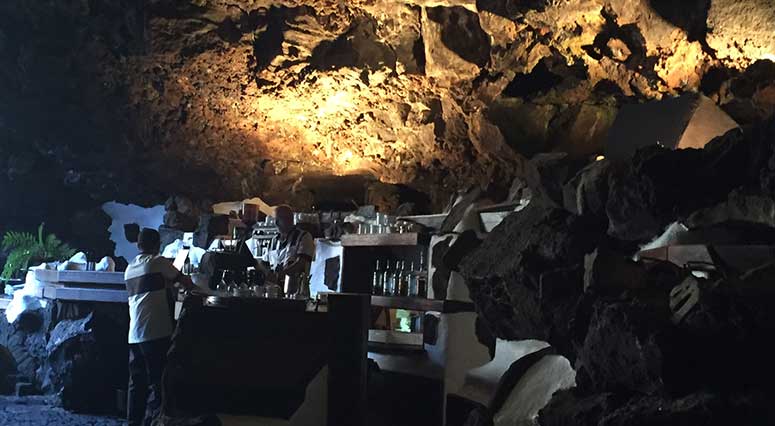 The Jameos del Agua is one of César Manrique‘s first and most famous works, combining nature and design. Constructed in and around a volcanic lava tube known as Tunel de la Atlantida (Tunnel of Atlantis) formed by the eruption of La Corona Volcano, the Jameos del Agua is a truly amazing piece of architecture.

As you descend into the first of the caves, Jameo Chico, you will notice a calm and cool atmosphere, towards the back of this first cave you will find a smaller cave with a lake giving you a view into the Tunel de La Atlantida which is truly beautiful.

The natural lake, formed by water seeping through the lava rock, is home to a unique species of tiny blind albino crabs (Munidopsis Plymorpha) that dot the lake floor like stars. Locally, they are affectionately known as Jameitos and are the symbol of the Jameos del Agua. Emerging from the other side of the lake is the Jameo Grande which is home to a small cafe and seating area where you can take in the breathtaking view back over the lake to the Jameo Chico.

Making the most of the space, Manrique designed a pool and garden area, with a single 100 year old palm tree that looms over the pool casting a delightful shadow. This view of the Jameos del Agua is probably the most famous! Again, there is plenty of seating and shade where you can linger and take in the quiet, relaxing atmosphere of Manrique’s creation.

At the end of the pool and garden area is a larger cave and home to the auditorium in which many concerts are held throughout the year. The acoustics in this large cave are astonishing and if you get the opportunity to attend any kind of concert or performance, you should take it!

The Jameos del Agua also has a small museum Casa de los Volcanes, which whilst it will take you through the interesting history of the volcanic eruptions across the Canary Islands, also performs important scientific and educational work in vulcanology.