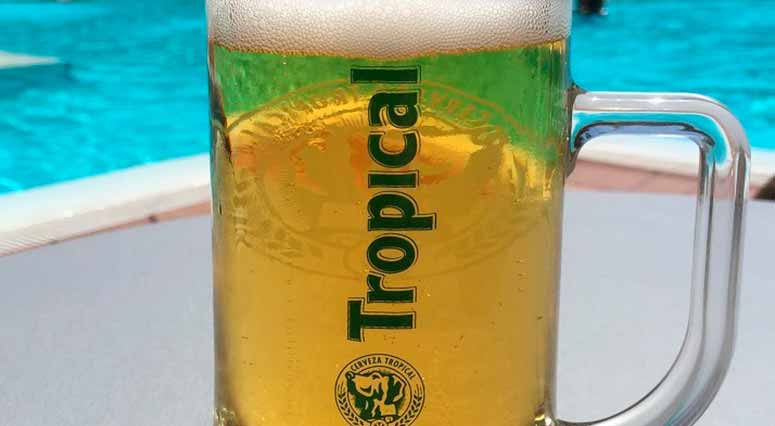 The Canary Islands in general are well known for their wines however, there are a couple of other drinks they produce.

Ron Miel
Ron Miel (Honey Rum) is the most popular Canarian drink among visitors and many leave with a bottle in their suitcase. Mainly because it is given to customers in restaurants after their meal a ‘chupito’, some even jazz up the shots with whipped cream and a dusting of cinnamon – which is pure delight.

Ron Miel has special status within the EU meaning that nobody else can use the name and it has to be made with local Canarian rum and honey.

Tropical was traditionally sold in small, 200ml bottles without labels called a botellin (pronounced ‘boteyin’). The idea was that you drank the beer before it warmed up and then ordered another, botellines are still sold in many local bars.

Rum
Mention rum in the Canary Islands and you get Arehucas. It’s the islands’ biggest brand and is made in the rum factory in Arucas, Gran Canaria. Arehucas is made in the traditional Spanish Caribbean way with alcohol made from the molasses left over after making white sugar.

There are 3 basic types of Arehucas:

White rum: unaged and pure and apparently has no hangover-inducing tannins which results in less flavor; it is mainly used to make cocktails and as a mixer.

Golden rum:aged for about 3 years in oak barrels and absorbs flavor and color from the wood. It can be drunk alone, in cocktails or with a mixer.

Aged rum (Ron Añejo) spends 5-30 years in the barrel and develops a rich flavor and dark color and is usually drunk straight with ice in much the same way as you’d drink a good whisky.

Th Canary Islands also produce a banana liquer that you will see in local shops however it’s not commonly served or drunk.