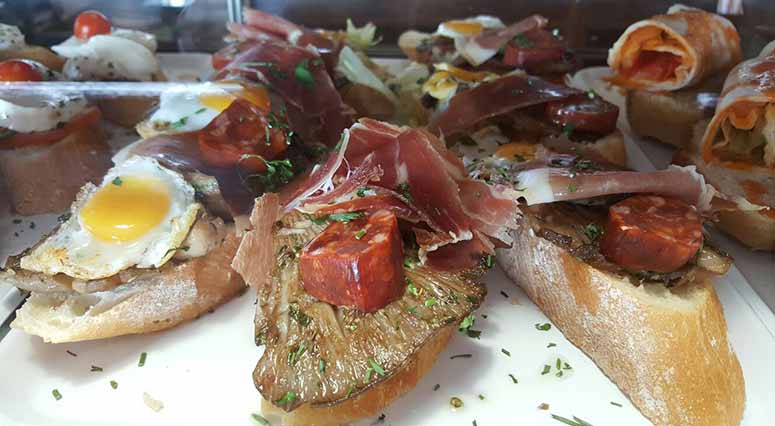 We all love eating out and Lanzarote’s cuisine comes as a surprise to many visitors. Those that choose to sample the local delights tend to keep coming back for more!

Whilst there are traditional Canarian dishes, Canarian food is heavily influenced by Spanish, African and Latin American flavours. Below are some of the local foods you will encounter as you travel the island. Eating out is a big part of the social scene on Lanzarote whether it’s enjoying a leisurely lunch or celebrating a special occasion.

Local fish
As you would imagine, fish is quite a big part of the local cuisine. Local dishes such as ‘Pescado a la sal’, fish baked in salt, and ‘Sancocho Canario’, a stew made with dried fish and potatoes can be found in Canarian restaurants.

Fresh Tuna steak, Calamari, Octopus and other Spanish seafoods are also widely available on local menus. The most common fish served in Lanzarote are Dorada (sea bream), Vieja (parrot fish) and Cherne (sea bass). Usually grilled (a la plancha) with or without garlic (ajo), the fish you’re eating will have been caught not far from the restaurant and simply could not be any fresher or tastier! 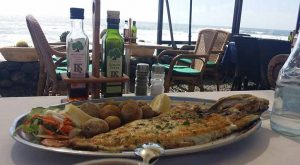 Meat
Due to the landscape, and as you may have noticed, there are not many cattle on the island! Having said that, meat is a real favourite with the locals and the quality is second to none as it’s mostly imported from South America. Goat (Cabrito) and Rabbit (Conejo) are also big favorites, in fact the locals still hunt rabbit on the island.

Canarians also love eating stews, they take time to create appetising pots of meat and vegetables usually spiced with paprika and other such exotic spices. Puchero and Potaje are stews/soups made from lentils, chickpeas, vegetables and meat. Keep an eye out for rabbit stew, a local delicacy that is truly delicious.

Accompaniments
The vital staple of most meals is papas arrugadas – literally wrinkly potatoes! They have a subtle earthy flavor and are traditionally boiled in sea water. They are always served with a selection of mojo sauces; the most popular being mojo verde (made with parsley or coriander) which is also served with fish, and mojo rojo (made with chillies and red peppers) which can pack quite a punch!

A prized delicacy and very rare are the tiny Papas Crías, surprisingly not actually a potato, they just look like one! Known as the desert truffle (La Trufa del Desierto) they are nothing like “genuine“ truffles, however their unmistakable mushroom type flavor makes them a sought-after addition to local cuisine.

Gofio is another vital staple of the local cuisine. Made from toasted corn and maize flour Gofio is very much an acquired taste. It’s served in various ways, such as an accompaniment to soups and other dishes as well as sweetened as a dessert. Today it’s mainly used to thicken and flavour soups, stocks and stews. A speciality is ‘Escaldon de Gofio de Caldo de Pescado’ – a rich fish stew made with gofio and vegetables.