Lanzaroteṅos are known for their friendliness, sense of humour and generosity. Enjoying life is a priority and any excuse for a party is welcome! The time-honoured tradition of the siesta is still observed in many places, with shops and banks often closing from 2-5pm. In the main tourist resorts, most of the shops and restaurants stay open to service the needs of visitors.

Language
The dialect spoken in Lanzarote and the Canary Islands is similar to that of southern Spain, the language spoken by the initial settlers. However, due to Canarians emigrating to the Americas over the years their language is also influenced by Caribbean and South American Spanish.

Gastronomy
The Canarian diet is dominated by fish, goats cheese and the great wine they produce. Lanzarote has a large population of rabbits and as such this also features a lot in their cuisine. Typical dishes generally include roasted fish/meat, potatoes, and garlic, accompanied by the famous mojo sauces, stews are also tremendously popular. Specialties include gofio, an acquired taste not for the faint hearted, which is very versatile and can be added to numerous dishes as a thickner. 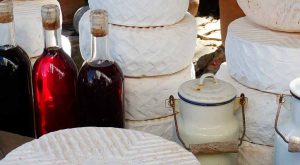 Artesania
Over time, the production of instruments for domestic chores became traditional craftsmanship and include decorative tablecloths and embroidered or lace fabrics, mats and baskets woven out of the empleita (palm leaves) which was even used to make a tool used to shape local cheeses, and hand-made pots for the kitchen. There are a number of producers of wind instruments, luthiers, who design and manufacture timples (the local small guitar), mandolins and oboes. They use a meticulous, mathematical and well-respected method of production dating back centuries.

Camel wool was widely used to make girdles, shawls, bags and traditional outfits on the loom, however today, they tend to use cotton, lambswool, linen or synthetic fabrics.

Pottery jars, pots and ceramic oil lamps are made with primitive tools or by hand. Famous pieces of artisan pottery include the figures of the bride and groom, a set of figurines with over-developed sexual attributes that were exchanged during the engagement ceremony.

Music and dance
As is the case in all Spanish regions, the Canarians have their own traditional music and dance reflecting their cultural heritage. The most famous is the ISA, characterized by its cheerful and colorful rhythm, people wear traditional clothes called traje de mago when they dance. The Canarians love of music extends to instruments too, and they created their very own, the timple, a five-string guitar-like instrument, similar to ukulele. 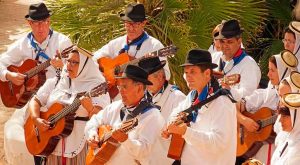 Carnival
The Canary Islands are home to the world’s third largest Carnival celebrations. In Lanzarote, Carnival takes place over a whole month travelling from town to town. The festivities include the election of the Carnival queen, parades, dancing in the streets, and end with a parade in Arrecife and burial of the sardine (a funeral-like tradition) that marks the end of the Carnival.

Lucha Canaria
Canarian wrestling introduced by the ‘Guanches’; the island’s original inhabitants. The sport originated around 1420, however only some of the original rules and techniques have survived to modern times. The sport became part of the islands’ folklore, usually being fought at celebrations or local festivals.