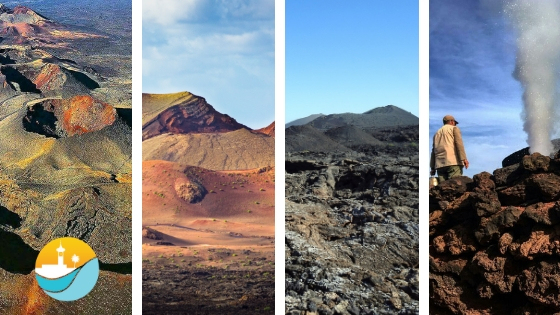 Timanfaya National Park is located in the southwestern part of the island of Lanzarote.
Because of the spectacular fields of solidified lava that make up the island of Lanzarote, Timanfaya is the land of volcanoes. The parkland is entirely made up of volcanic soil. Different volcanic eruptions and magmatic activity throughout history turned this land into what we see today.
From the natural viewpoint of Montaña you can observe a vast sea of lava that spreads out to the coast. It is simply impressive: undulations, spectacular shapes formed by lava…

The greatest recorded eruptions occurred between 1730 and 1736. The volcanic activity continues as the surface temperature in the core ranges from 100 to 600 °C at the depth of 13 metres, which is demonstrated by pouring water into the ground, resulting in a geyser of steam which is an attraction for tourists as you can see in the pictures. There is only one active volcano, the Timanfaya volcano, after which the park is named.
Since it was formed, the people living on the island have had to learn how to coexist with this unusual landscape, and they even grow dryland crops such as melons, onions and tomatoes. The most important way of survival for many people in that area was vineyards in the area of La Geria. But you will also ask how can an island as dry as Lanzarote produce excellent white wines and sweet wines? The answer is in “ La Geria”, a cone-shaped hollow excavated in natural layers of volcanic gravel several metres deep and in the centre of which a vine is planted, a wall in the shape of a half moon is then built around the vine in order to protect it from the wind. Row after row of these perfect hollows which are tinted green, ochre and black result in a most unique landscape.
After seeing this area you will know why Lanzarote has been included in The Unesco World Network of Biosphere Reserves. The national park is one of the core areas of the biosphere reserve.

It is important that you know that the access to the park by the public is strictly regulated to protect the delicate flora and fauna. There is only one bus-tour which will show you the whole park including the volcanos. If you are feeling to do something more adventure there is also a popular short route where you can see some points of the park by camel.